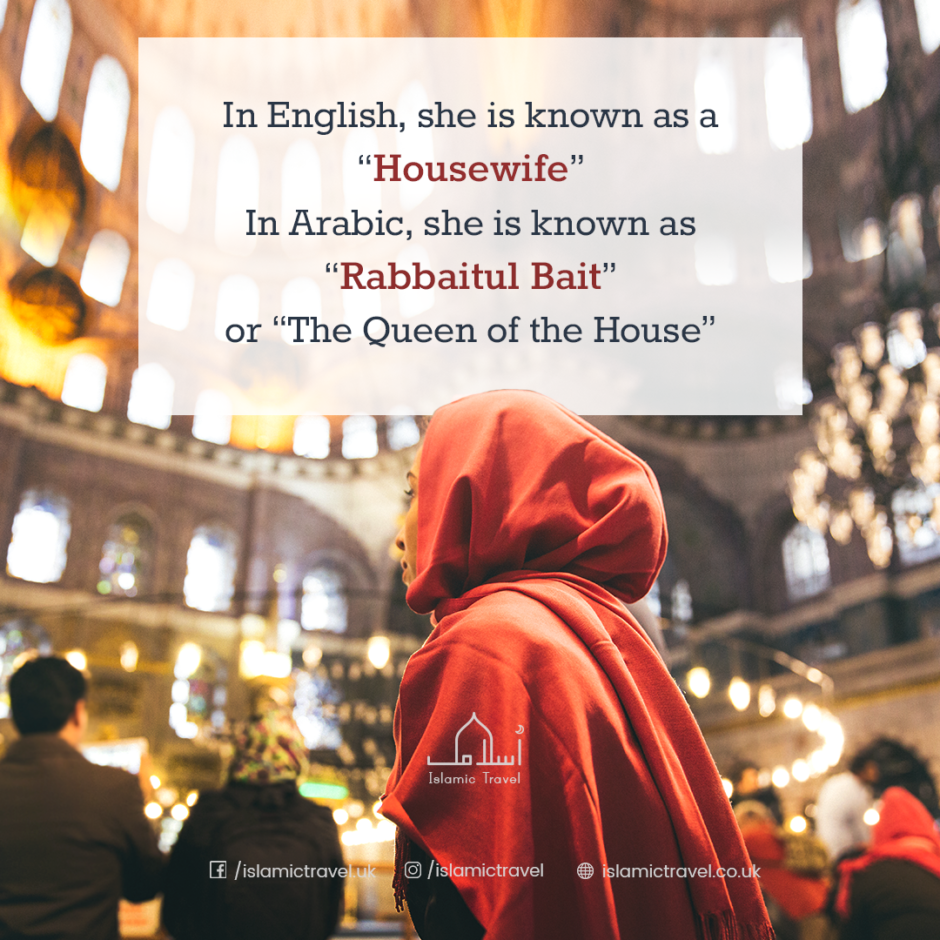 Who says that there are no rights for the wife in Islam? Who says that husbands are always superior to their wives in the eyes of Islam? Well, these are just misconceptions about Islam that non-followers are spreading all over the world but in fact, there is no other religion that offers as many rights and respect to women as Islam does.

In English, she is known as “housewife”, In Arabic, she is known as “Rabbaitul Bait” or “The Queen of the house”; I’m sure that you would be impressed to hear that! Because this is what that Islam says about a woman, about a wife!

The Arabic language actually describes the words in full depth and it describes the true meaning of the words in the light of Islam. Therefore, she is called “Rabbaitul Bait” because she is the queen of her house, her house is her kingdom and in her kingdom, her children live whom she brings up by putting all of her sincere efforts. Husband is called the king of that kingdom.

She is considered as Queen of her house not only by words but in the true sense, she owns many rights over her husband.

Let’s have a look at the rights that “Rabbaitul Bait” owns to her husband. Basically, we categorize her rights in two ways:

Islam protects financial rights of the woman after marriage in three forms basically that are Mahr, spending, and accommodation. It is a must for the entire husband to fulfill these rights of their wives.

Mahr: Mahr is a mandatory payment that a groom has to pay to her wife and Mahr can be in form of money or possession. Mahr becomes the property of wife in legal terms and then the husband has no right to claim it back.

And give the women [upon marriage] their [bridal] gifts graciously. But if they give up willingly to you anything of it, then take it in satisfaction and ease.” [Al-Nisaa’ 4:4]

The purpose of Mahr or Dowry is to show the seriousness of a marriage contract and also, it is considered as a token of respect by the wife.

It is the responsibility of a husband to provide accommodation to her wife according to his means and affordability. In fact, a woman is not obliged to live with her in-laws and she is entitled to live in a separate home, however, if she has no problem to live with the family of his husband then she will be given reward by ALLAH.

Another important right that a woman is entitled to get from her husband is spending. Husband is obliged to spend on his wife as long as she makes herself available to her but in other cases; the woman will not be entitled to this right. Spending basically means to fulfill the basic needs. When a woman gets married to a man, she depends on her husband only for all the basic rights and so a man must spend on her.

A wife is a person who keeps the family united. Of course, she deserves for love, care and kind treatment in return. A husband is obliged to treat her in a kind way and to love her. ALLAH has ordered men to live with their wives in kindness. They should have good communication with spouses having the smile on the face. A man who is good in communication always has a good relationship with her wife as he knows how to keep her lady satisfied.

Permission of first’s wife for next marriage:

If a man wants to have another wife then he should take permission from the first wife to show good manners and kindness but it is not mandatory in the light of Islam. Anyways, ALLAH says that it is good to bring 1st wife in confidence in order to protect her from emotional stress.

A man is allowed to have four wives at a time but only if he can treat them equally. A man having more than wives has even more set of responsibilities. He must provide equal rights to all of his wives regarding clothing, spending, and accommodation and nights spent. In simple words, he must create a balance among his wives not only physically but also financially and emotionally.

Now, you are sure how Islam honors a woman and how this beautiful and complete religion protects the rights of a woman after marriage. In simple words, she is, after all, the queen of her house and s she owns many rights.

Some people say that a woman has no home. In fact, they are wrong but actually, a home is not called a home if there is no woman. The woman plays the most important role in keeping her family united; on one side, she makes herself available to her husband for the sake of his pleasure and on the other side, she trains her children, nourishes them and makes the best possible efforts for their grooming. A woman is called the mother of the nation because she nourishes the children, the future of the nation!

For all these things, she, of course, deserves love and care and she must be called the queen of the house. Therefore, Islam has proven itself as a complete religion by naming a married woman as “Rabbaitul Bait” because, in other religions, a married woman is just named as the housewife. Don’t you that a married woman should feel confident as she has so many rights to live a happy and quality life!

If all the men commit to themselves to fulfill these rights of their wives, I’m sure that they will bring peace and pleasure in their homes, in their families and most importantly, in this society.

Fajr Prayer and its Importance for a Muslim

Dua is a Weapon of a Believer